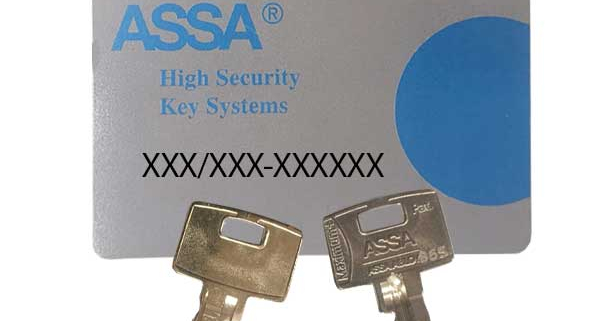 Restricted keys are keys that can only be duplicated by someone authorized to duplicate them. The increase in key duplication machines and apps that cut keys based on pictures has increased the demand for restricted keys. Keys stamped “Do Not Duplicate” is a more of a suggestion to the person holding the key. Few stores will check the bow of a key and a key duplication kiosk certainly won’t. There are several different levels of restricted systems; They can be restricted by only being sold to a locksmith or security company. They can be restricted by a locksmith in a geographic region, or they can be restricted to only one locksmith company. The first question we ask anyone inquiring about restricted or high keys is what is their end-goal and purpose. A small store might want to make sure employees can’t easily copy keys while a bank might be interested in making sure the keys are very restricted and have special drill protection. After discussing the needs of the client we can generally narrow down to one or two systems that we would recommend.

We currently stock several different restricted and high security key systems. The most basic option is choosing a key that’s less common like Yale or Corbin Russwin. Hardware stores and key machines typically don’t have these types of blanks in stock and this makes it harder for a person to make an unauthorized copy. However, this method really just slows someone down who’s interested in duplicating a key.

If someone is using SFIC cores there are several great options. Firstly, SFIC keys should be punched not manually duplicated. Getting working keys by duplicating them is often challenging. Additionally, places like Home Depot or Lowe’s don’t stock these blanks. Hardware stores are also unlikely to carry them, especially if you use an unusual keyway. We carry an inexpensive keyway that’s restricted to locksmiths only. If someone went into a locksmith shop asking to have one of these keys duplicated they should probably have a good story prepared because they’re going to be asked some questions. However, this method only prevents the keys form duplicated by honest locksmiths.

Next we have MX alpha which is a national keyway and MX which are regionally restricted by different numbered keyways. Every locksmith that wants to carry these keys must buy a large amount of inventory in order to be able to carry the product. This creates a disincentive for anyone to make an unauthorized key because if they get caught they’ll lose their ability to buy more of the product. The odds of someone getting an unauthorized copy are low but it’s still a possibility.

We can also install other systems like Schlage Primus, Medeco and Mul-t-lock. We currently do not stock this keys but can easily order them for special projects. We are just at the mercy of shipping and the supply chain. While these are good systems I do take some issue with both of them. Schlage Primus,  Medeco and Mul-t-lock are expensive. Buying one or two can easily be justified but if a project calls for 10-20 locks the price can easily get very high. Medeco keys are also prone to breaking. The deep angled cuts can create weak points where keys can bend and break. Calling a lockmith to pull an expensive key out of a lock is not something most customers are fond of doing. Mul-t-lock keys are nice because no matter which way you insert the key, the lock will work because they are cut on both sides. They are also a quality product. However, Mul-t-lock is often times more expensive than Schlage Primus or Medeco.

Considering all the options we have chosen ASSA Max+ for our go-to high security restricted key system. This system strikes a good balance between price and performance. ASSA Max+ is a system appropriate for highly sensitive areas like utilities, financial institutions, banks, and companies with large amounts of sensitive data or valuable inventory. In fact, we recently installed them at a bank in Shaker Heights. Max+ is patented until 2019. Meaning, taking brass and milling the metal to make a key that will fit would actually be patent infringement. Unauthorized key duplication probably won’t get you in legal trouble but milling a Max+ key with a CNC machine definitely will. They are going to enforce the patent because that’s the point of the patent.

We’ve carried their products for a while but we now have our own sidebar. The sidebar acts as an additional security measure effectively making one key like two. There are standard key cuts then key cuts on the side of the key that match a coded sidebar. They also make cylinders that have UL rated drill protection. One of our favorite parts of this system are the incredibly robust keys. They are incredibly thick which dramatically reduces the chances of them breaking. I’ve done several experiments trying to bend different types of keys. ASSA Max+ puts up a killer fight.

Another reason why we chose this system is that ASSA is going to be around for a long time. ASSA Abloy has 20% of the global market share for lock and door products.

When an ASSA Max+ system is sold it must be registered. There are key cards that a person can present as part of the process to get authorization to make a key. In addition, we have our own internal key tracking system.

A Locksmith’s Guide to Selecting a Smart Lock